This week we are comparing numbers to 10. Children will make comparisons by lining objects up to compare them directly or by counting each set carefully and comparing their position in the counting order. We will continue to embed the vocabulary introduced in the autumn term ‘the same as’, ‘more than’ and ‘fewer than.’

Watch the Numberblocks episode ‘Peekaboo.’ This episode compares numbers to 10 using the language of ‘bigger than’, ‘smaller than’ and leading to ‘greater than’ and ‘less than.’

As you watch the episode together, discuss the numbers and how they compare to each other. Encourage your child to use the correct mathematical vocabulary of ‘the same as,’ ‘more than’ and ‘fewer than.’

Once you have watched the Numberblocks episode, ask your child to make sets of different household objects to 10. For example, ask your child to find a set of objects that has fewer than 7 in it, or point to a set that has more objects than 3 in it. Is there more than one answer to these questions? Can they find the set that has the same number as 6 in it? They could gather pegs, spoons, food items, socks etc. They should practise their counting and number formation by labelling each set with the number of objects that it contains. Use the correct mathematical vocabulary modelled in the Numberblocks episode to compare the sets.

They could also practise writing their name. How many letters does it have? Does their name have more letters, less letters or the same number of letters as other members of their family? 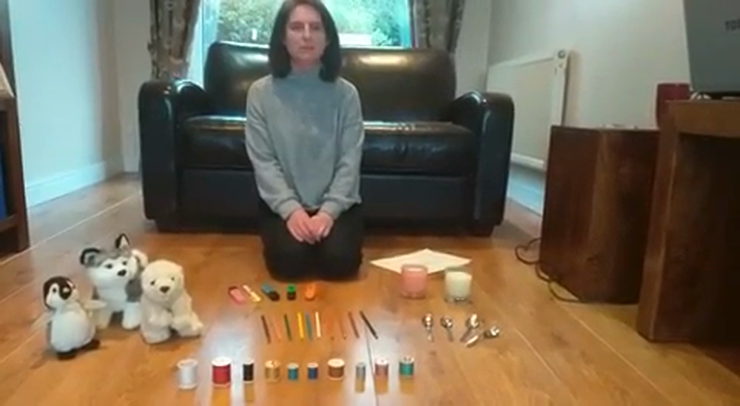 Once you have watched the video clip, write the numbers 1-10 on separate pieces of paper. (N.B. Your child may find this task easier to complete if there are also dots drawn on the paper to represent each numeral.) Give them to your child one at a time but not in the correct order. Ask them to place them in order explaining their thinking as they do so. For example, you could give them the number 2 and then the number 8. Which number is smaller? Which number comes first when we count? Place them in order 2 first and then 8. Now give them the number 5. Where will this number fit? Again ask them to explain their thinking to you as they place number 5 in between the numbers 2 and 8. Continue like this until all the numbers have been given out and placed in order.

As your child is playing the game, encourage careful counting of the ladybirds’ spots. When they are putting the ladybirds in order, model the use of and encourage them to use the correct mathematical vocabulary (more than, fewer than, etc.) when explaining their decisions.

Mathematical language can also be taught through books. We have provided the links to two stories by Quentin Blake which could be used to promote the language of comparison.

While reading Mr Magnolia, count and compare the different number of objects that he has and which are drawn on each page. Encourage careful counting to ensure accuracy.

Use your knowledge of number to complete the problem solving activity and upload it to Google Classroom. If you don’t have a printer, simply complete the problem on a piece of paper. (N.B. Your child may find it useful to use practical objects in order to help them solve this problem.)

Lots of games lend themselves to comparing numbers. For example, the ten pin bowling game suggested last week could be played again, this time focussing on who knocked down more skittles. How do we know? This could be extended for some children by asking them how many more skittles were knocked down?

Work through the PowerPoint Comparing Quantities in Teddy’s Toy Shop. Encourage your child to practise using the correct mathematical language of ‘more than’ and ‘fewer than.’ This activity could be extended for some children by introducing the question ‘How many more than?’

Challenge your child by giving them some paper plates/ pieces of paper with dots drawn on them from 0-5. You could use the link below.

Ask them if they can find:

A pair of plates/ pieces of paper that have a total of 4.

A pair of plates/ pieces of paper that have a total of 5.

A pair of plates/ pieces of paper that have a total of 6.

Is there more than one way to answer each question?